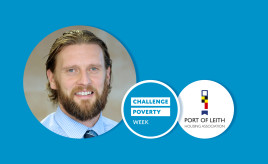 #AyeWeCan 3: Breaking the cycle of poverty and exclusion 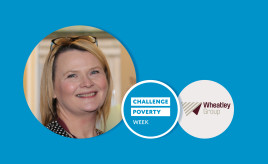 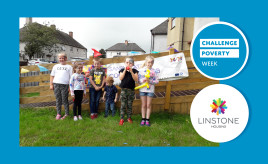 #AyeWeCan 1: Shining a light on poverty and inequality

In this first of a series of blogs for Chalenge Poverty Week 2019,  Sally Thomas, SFHA Chief Executive, considers the roles that housing associations can play in addressing the issues of poverty.

This is Challenge Poverty Week, when we want to shine a light on poverty and inequality and see how we can end it in what is, after all, one of the world’s wealthiest economies.

A slew of reports from across the political spectrum – including Joseph Rowntree Foundation, the Institute of Fiscal Studies, the Future of Civil Society, the UN Special Rapporteur, the Nuffield Foundation – show poverty across a range of sections of society increasing. Child poverty is accelerating; in Scotland, 43% of children in socially rented homes live in relative poverty, with 25% in absolute poverty.

However, despite the above figures, Scotland is in a more ‘fortunate’ position than the rest of the UK. The report, Poverty in Scotland 2019, released today by the Joseph Rowntree Foundation shows the key role of housing in people’s lives and how types of housing, and the lower cost of housing, in particular, in the social rented sector, mean that poverty is significantly lower in Scotland than in the rest of the UK overall.

Income inequality across the board is increasing and shows no signs of slowing down. One of the contributors to this growth in poverty is the growing disparity of wages with house prices and private sector rents, dramatically illustrated in the film PUSH, which SFHA is screening in collaboration with Shelter Scotland and Oxfam Scotland at the Netherbow Theatre in Edinburgh tonight (Monday 7 October).

It does not have to be this way. The hashtag for the week is #AyeWeCan. Over the coming week, there will be articles in our daily newsletter Housing Scotland Today showcasing just how our members are addressing issues of poverty and inequality. Many have put into place resources to support and protect their tenants – welfare advice and support, collaborations with food banks, welcome packs for new tenants and encouraging and promoting digital access being just some of the examples.

To continue to do this at scale and sustain it, however, requires coherence, focus and resource at a whole systems level. Which is what they have been doing with some considerable success in Canada, by organising their communities differently and adopting a specific methodology to fight poverty.

About 15 years ago, a disparate group of Canadians realised that a problem as complex as poverty can only be addressed through a multisector, comprehensive approach. They understood that poverty was not going to be reduced by some amazing new programme no one had thought of before. It was going to be addressed through better systems that were mutually supporting and able to enact change on a broad level.

So they began building community and city-wide structures. They’d begin by gathering around 100 people from a single community – around a quarter lived with poverty, the rest were from non-profits, business and local government. They spent a year learning about poverty in their area, talking with the community. The aim was to move people out of poverty – then eradicate it – then create a vibrant community in which everybody’s basic needs are met. By the time Canada’s national government swung into action, the whole country had a base of knowledge and experience – a wealth of connections and a sense of what needed to be done. The two biggest changes were huge efforts to raise the minimum wage and the expansion of national child benefit.

What started 15 years ago in six cities is now 72 regional networks, covering hundreds of towns and cities. According to recently released data, between 2015 and 2017, Canada reduced its official poverty rate by around 20% – roughly 825,000 Canadians were lifted out of poverty in those years, giving the country today its lowest poverty rate in history.